Pentacle to benefit from May 31 reading of “Sordid Lives” 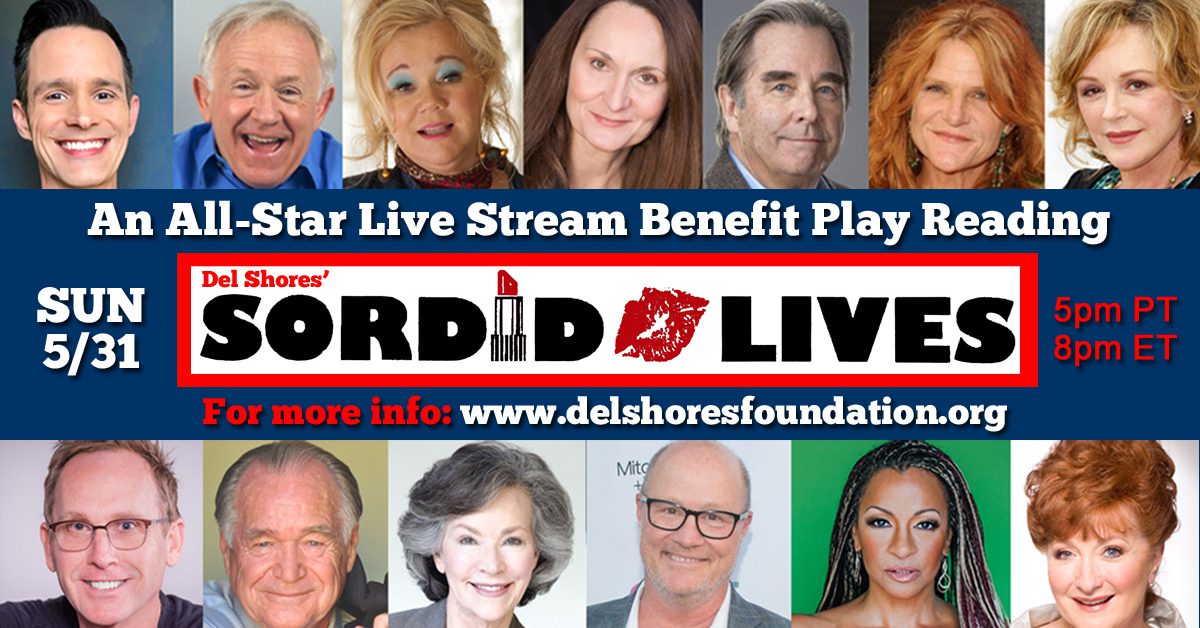 And a message from OLIVIA NEWTON-JOHN

The Del Shores Foundation presents a one-night-only benefit reading of the original SORDID LIVES play by Del Shores for a #SordidLiveStream. The reading will be live streamed on YouTube and Facebook on Sunday, May 31 at 5pm Pacific/8pm Eastern, hosted and produced by Emerson Collins and Del Shores. The reading will star cast from the original 1996 play, the cult-hit 2000 film, LOGO’s 2008 “Sordid Lives: The Series” and the 2017 marriage equality-themed film sequel “A Very Sordid Wedding.” The free live stream reading and accompanying auction of Sordid Lives memorabilia is a benefit fundraiser for twenty-three live theater companies who are associated partners of the Del Shores Foundation and support its mission to find and facilitate the development of new southern queer artistic voices. All of the artists are donating their time and 100% of proceeds will go to the theater companies, including Pentacle Theatre. Donations to the benefit can be made at www.delshoresfoundation.org.

SORDID LIVES is a black comedy about white trash as a gay actor struggles to come out to his eccentric, dysfunctional Texas family. When the family matriarch trips over the two wooden legs of her lover in a seedy motel room, her funeral brings three generations of the family back together in a story about learning to love the family you have as they are, not as you wish them to be.

At twenty-four years old, The SORDID LIVES franchise is one of the longest running LGBTQ franchises, and the cult-classic film celebrates its twentieth anniversary this year. It began as a play in a sixty-four seat theaer named Theatre/Theater in Los Angeles in 1996. The play starred Leslie Jordan, Beth Grant, Rosemary Alexander, Newell Alexander and Ann Walker and ran thirteen sold-out months with thirteen Critic’s Choice Awards. The play has been produced by over 300 theater companies nationwide. In 2000, the film adaption added Bonnie Bedelia, Beau Bridges, Delta Burke and Olivia Newton-John and won many film festival awards with thirteen Audience Awards. The film became a cult-hit as it ran in limited release in theaters for almost three years before selling over 300,000 DVDs. In 2006, the play was revived in Los Angeles before launching a national tour. In 2008, the prequel “Sordid Lives: The Series” welcomed Caroline Rhea and Rue McClanahan and was released on LOGO and syndicated in seventeen countries. In 2017, the marriage-equality themed sequel reunited cast from the film and series in “A Very Sordid Wedding” with a cameo from Whoopi Goldberg and twelve out LGBTQ actors including Emerson Collins, Alec Mapa and Levi Kreis. It opened as number one at the limited release box office before playing more than 60 cities and is now streaming on Hulu and Amazon Prime.

About the Del Shores Foundation

The Del Shores Foundation is a new 501c3 non-profit with a mission to find and facilitate the development of new southern queer artistic voices through bringing together artists and working professionals, amplifying new work and connecting artists to platforms for the creation of the work. The Board of Directors, Executive Director Del Shores and Program Director Emerson Collins decided to halt all fundraising and event planning efforts during the pandemic to support the fundraising efforts of those in need. Foundation events will resume in the future.

About the Creative Team

DEL SHORES (Playwright/Director/Executive Producer) is the writer/director/producer of the films “Sordid Lives,” “Blues for Willadean,” “Southern Baptist Sissies” and “A Very Sordid Wedding.” He wrote and executive produced the MGM feature “Daddy’s Dyin’…Who’s Got The Will?” He has written seven previous plays, all published by Samuel French, produced thousands of times worldwide with four adapted for the screen which have run collectively for over seven years in Los Angeles. Southern Baptist Sissies won the GLAAD Award, The Trials and Tribulations of a Trailer Trash Housewife won the NAACP Theatre Award, and both Yellow and Trailer Trash won the LADCC Award for Best Original Play and Best Production.  In television, Del wrote, directed, executive produced and created the LOGO series, “Sordid Lives: The Series.” He also wrote and executive produced on the last three seasons of Showtime’s “Queer As Folk,” and wrote and produced for “Dharma & Greg” and “Ned & Stacey.” Shores has performed in hundreds of standup gigs in three national tours, all filmed for DVD.  His new one-man play Six Characters In Search Of A Play has performed in 33 cities, seven film festivals and won three film festival awards and is now a film available on BroadwayHD. Lifetime Achievement Awards from FilmOut San Diego and LA Weekly.

EMERSON COLLINS (Executive Producer/Host) is an actor, producer and director best known for four seasons of BRAVO’s “The People’s Couch” and “RENT” on FOX.  He produced and starred in the films “A Very Sordid Wedding” and “Southern Baptist Sissies,” winning Best Actor at the Red Dirt International Film Festival for Sissies. He produced and starred in the national tour of the play of Sissies and produced the national tour of Sordid Lives. Emerson won the Desert Theatre League Award for Best Actor in a Comedy for the regional premiere of the one-man show Buyer & Cellar. Collins co-produced and recurred in LOGO’s “Sordid Lives: The Series” and produced “Blues For Willadean.”  He directed all three of Del Shores’ standup comedy DVD specials and directed Shores’ one-man play “Six Characters In Search Of a Play” on stage and for film where it won awards at three film festivals. He has produced countless variety show and event nights across the country. Emerson regularly appears nationally and internationally at film festivals and as a speaker on LGBTQ representation in film. www.emersoncollins.com