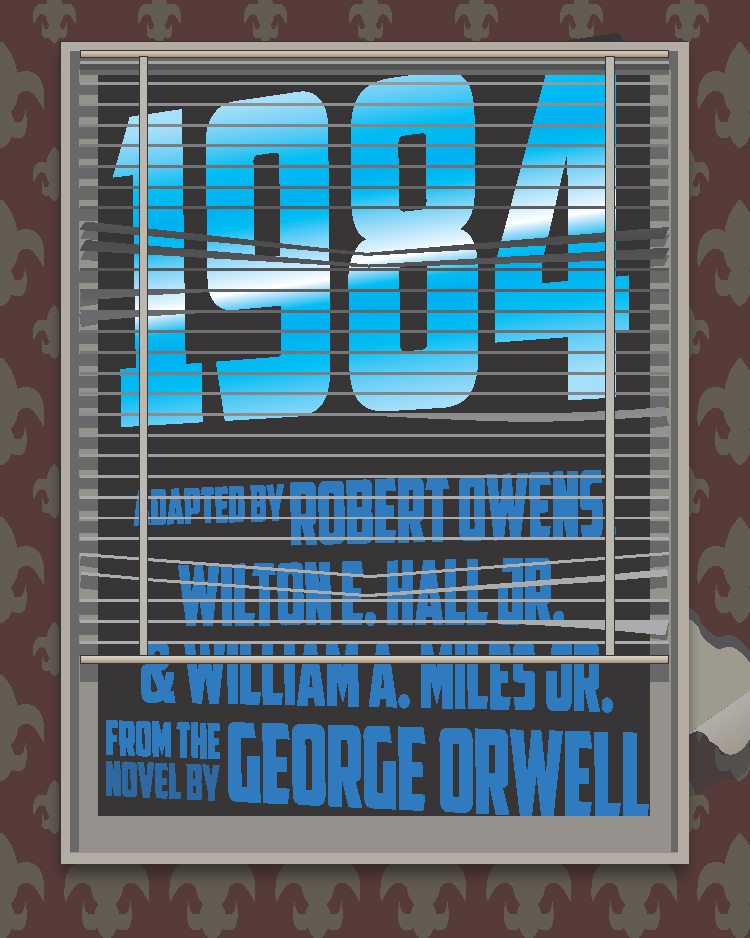 1984 is a thrilling drama adapted for the stage from Orwell’s novel. It depicts the horrors of man’s fate in a society where Big Brother is always watching, and where everything that is not prohibited is compulsory.

“It’s a powerful and provocative look at a dystopian future where ‘War is peace, freedom is slavery, and ignorance is strength,” said Jenni Bertels, who directs the play.

Bertels assembles a cast of strong actors to focus the action on how government thought control compels and affects each character.

English teachers often assign Orwell’s novel 1984 to middle- and high school students because of its strong, thought-provoking story of what could happen if society gives in to strong government control of thoughts, beliefs and actions.

As Orwell said about his novel, “I do not believe that the kind of society I describe necessarily will arrive, but I believe that something resembling it could arrive. The moral to be drawn from the dangerous nightmare situation is a simple one: Don’t let it happen. It depends on you.”

What: 1984, adapted for the stage by Robert Owens, Wilton E. Hall, Jr., and William A. Miles, Jr. Directed by Jenni Bertels, with David Cristobal as assistant director.

Sponsored by: 1984 is made possible by the generous support of Pentacle patrons Glantz Law Group. .

Pizza and Performance night for middle school through college students: Pentacle Theatre is offering a special “Pizza and Performance” night discount for middle school through college students for the Saturday, July 7 show. Just $12.50 buys eligible students pizza and soda on the Pentacle Theatre deck, a seat for 1984, and a special post-show talkback about 1984 with the cast and crew. To reserve your ticket, call the Pentacle Theatre ticket office at 503-485-4300. Don’t forget to let us know your pizza preference and bring your student ID to the theater.

CONTENT ADVISORY: Pentacle Theatre seeks to inform our patrons about content that they may find objectionable. Because tastes vary — and what is offensive is subjective — we encourage you to read the script before purchasing a ticket if you’re concerned.

While there is no rating system for plays, this adaptation of George Orwell’s classic novel 1984 is recommended for ages 14 and older, unless accompanied by a parent.