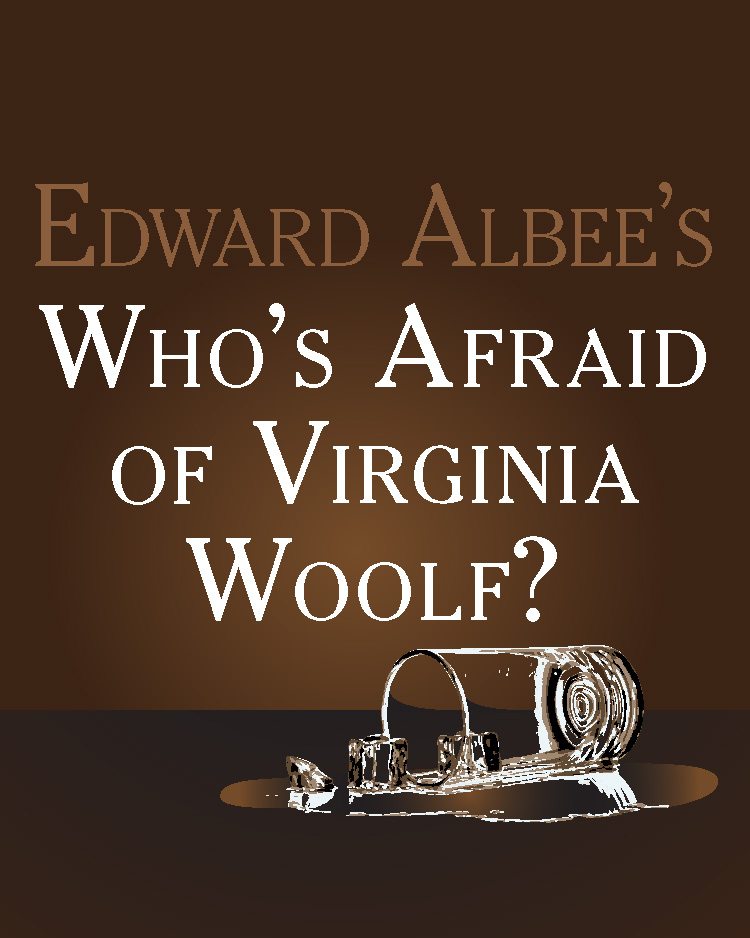 “This is a rare opportunity to see Albee’s towering American masterpiece,” said director Ed Schoaps. “It’s a powerhouse of a play that stunned audiences by its frank realism and emotional depth when it premiered in 1962, and it’s as true to life today as it’s ever been,” Schoaps said.

During a late night of post-party “Fun and Games” with burnt out college professor, George, and his sharp-tongued wife, Martha, we meet the newest young faculty member, Nick, and his tipsy wife, Honey. What starts out as nightcaps and scholarly small talk quickly turns into an all-night contest of words, wits and wills between George and Martha that catches Nick and Honey in the crossfire. Deep secrets are revealed as both couples careen toward the truth about themselves, one another and their relationships.

“Forget what you think you know about Who’s Afraid of Virginia Woolf?” said Schoaps. “You’re going to see a scathingly smart, viciously funny, intense and emotionally compelling story that will leave you breathless at the end. This is one of the best modern plays ever written, which is why it endures.”

Who’s Afraid of Virginia Woolf? returns to the Pentacle stage for the first time in 33 years, Schoaps said. “The timing and casting couldn’t be better,” he added.

Schoaps is dedicating the show in honor of playwright Edward Albee, who died in September, and the late Jack Bellamy, who directed Pentacle’s previous production.

“Jack Bellamy changed my life as an actor when he cast me as Nick in Pentacle’s 1984 show,” Schoaps said. “I learned so much from Jack—he not only taught me about Albee’s script but also what it means to be fearless onstage—and from working with our talented original cast.”

Opening night will feature a cast reunion of the 1984 Pentacle production of Who’s Afraid of Virginia Woolf? Fred Owen, who played George, Louise Larsen, who played Martha, and Susan Jenks Holmes, who played Honey, will join Schoaps as special guests.

When and where: Who’s Afraid of Virginia Woolf? runs from Friday, July 7, through Saturday, July 29, at The Pentacle Theatre, 324 52nd Ave. NW, about 6 miles west of downtown Salem.

Tickets: Tickets cost $23 for weekday performances and $24 for weekend shows. Seniors, students, active military and Pentacle Theatre members receive a $1.50 discount. There is an additional $1 fee on opening night for the catered post-show party.

Who’s Afraid of Virginia Woolf? is an emotionally intense play with adult themes, language and actions. Mature high school students interested in theater and literature have a rare opportunity to see a Tony Award-winning American drama of the 20th century that shocked audiences when first produced. Parental guidance is recommended.