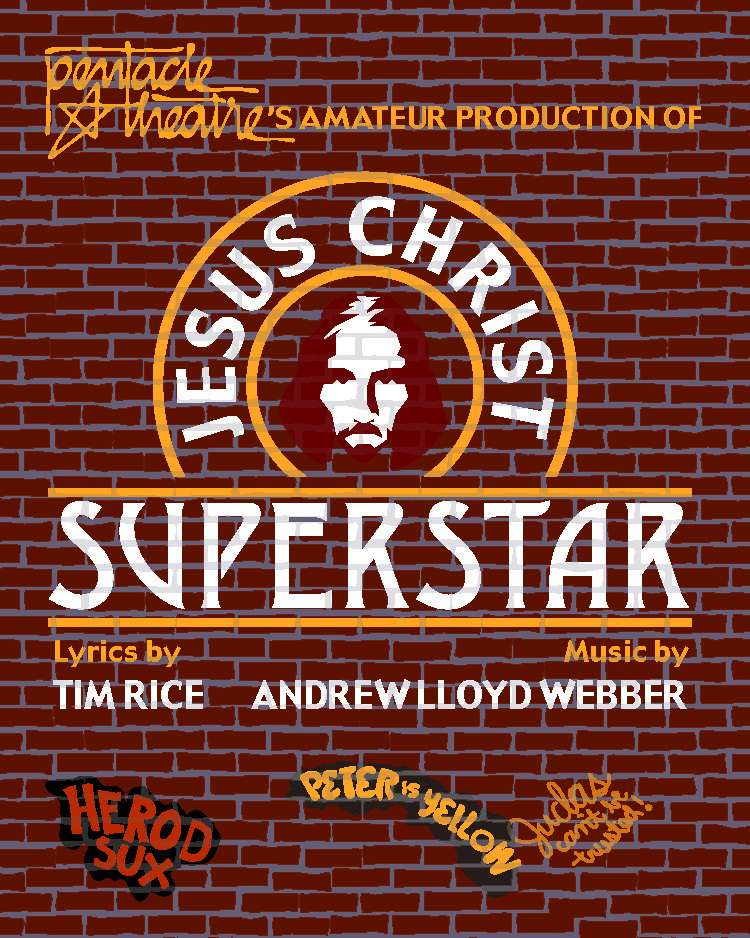 What:              Auditions for Jesus Christ Superstar by Andrew Lloyd Webber and Tim Rice.

Jesus Christ Superstar is a 1970 Broadway rock opera that tells the story of the last week of Jesus’ life through modern rock music and contemporary slang. The musical is sung-through, with no spoken dialogue. The story is loosely based on the Gospels accounts of the last week of Jesus’s life, beginning with the preparation for the arrival of Jesus and his disciples in Jerusalem and ending with the crucifixion. It highlights political and interpersonal struggles between Judas Iscariot and Jesus that are not present in the Bible narratives. The focus is on the relationship between Judas and Jesus, which has been imagined for the musical. The musical is also unusual in its choice to tell most of the story through the character of Judas Iscariot, the apostle who will betray Jesus to the authorities.

Pentacle Theatre encourages actors of all abilities and ethnic backgrounds to participate in its productions.

Principal roles (will not double in any other role):

Jesus Christ Tenor (A2-G5): Protagonist of the story, leader of the twelve Apostles, and son of God, Messiah and King of the Jews. This text—Rice and Lloyd Webber’s show—is interested in Jesus as Messiah and man both, and not only his spiritual ministry, but also his personal experience and political role in the world.

Judas Iscariot, Tenor (D3-D5): One of the twelve apostles of Jesus; concerned for the poor and for the consequences of Jesus’ fame. A tragic figure, a conflicted man, and a powerfully passionate guy. Most certainly not a bad guy—he’s as desirous of being pure as Jesus is, and believes he is doing the right thing.

Mary Magdalene, Alto (F3-E♭5): A female follower of Jesus who finds herself falling in love with him. She’s a prostitute, and she tries in her way to care for Jesus, so there is tenderness, and desire, but this is a woman of great strength.

Pontius Pilate, Baritone (A2-B4): Governor of Judea who foresees the events of Jesus’ crucifixion from beginning to aftermath in a dream and finds himself being presented with that very situation.

Caiaphas, Bass (C2-F4): Joseph Caiaphas was the high priest of Jerusalem who, according to Biblical accounts, sent Jesus to Pilate for his execution.

Annas, Tenor (G2-D5): Fellow priest at the side of Caiaphas who is persuaded by Caiaphas into seeing Jesus as a threat.

Peter, Baritone (G2-G4): One of Jesus’ 12 apostles; denies Jesus three times upon the night of Jesus’ arrest to save himself.

Simon Zealotes, Tenor (G3-B4): One of Jesus’ 12 apostles; urges Jesus to lead his followers into battle against the Romans.

King Herod, Baritone: The King of Galilee; Jesus is brought to him for judgment after first being taken to Pilate.

Seeking a group of performers of a variety of ages to play the nine ensemble apostles, priests, soldiers, beggars, lepers, angels, dancers, etc.

For more information: Contact director Geri Sanders at gerilyne@comcast.net, or call the Pentacle Theater office at 503-485-4300.