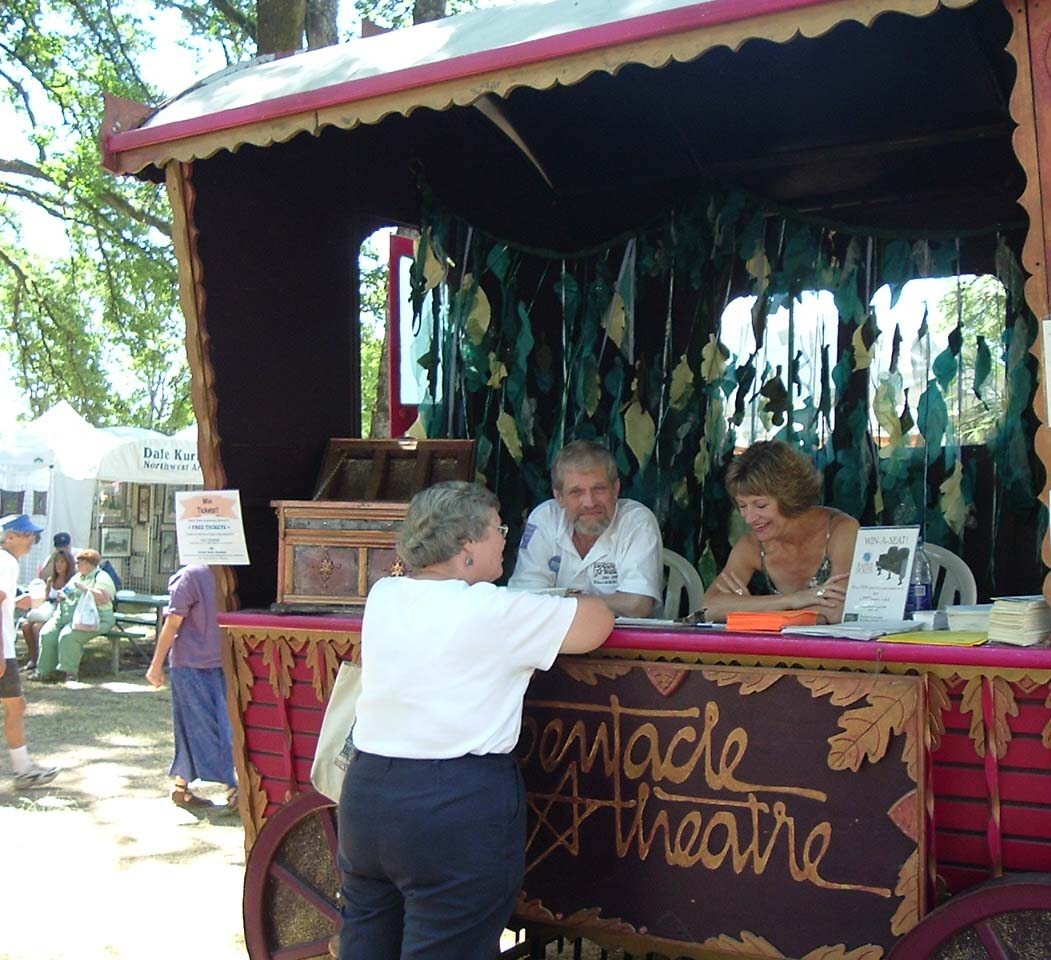 Pentacle Theatre announced its 2017 season of shows from its famous Gypsy Wagon at the Salem Art Fair and Festival.

“We’re thrilled with the 2017 line up,” said Lisa Joyce, Pentacle Theatre’s executive director. “It’s a great mix of musicals, comedies and dramas that will give our amazing local talent a chance to shine while delighting our patrons.”

The plays range from familiar rousing comedies such as the season opener Noises Off to the classic drama Who’s Afraid of Virginia Woolf?

Pentacle’s family-friendly pre-season fundraiser will be the beloved Seussical, directed by Robert Salberg.

“We’re very excited to bring this production to the beautiful Elsinore Theatre in downtown Salem for its limited run,” Joyce said. “Seeing Seussical will be a wonderful date for the whole family, with great choices for dinner all around the theater.”

“The most dexterously realized comedy ever about putting on a comedy. A spectacularly funny, peerless backstage farce. This dizzy, well-known romp is festival of delirium.” — The New York Times.

This beautiful drama about a woman’s attachment to the child she had hoped to adopt was originally produced at the Oregon Shakespeare Festival.

Music by Andrew Lloyd Webber and lyrics by Tim Rice

A rock opera retelling of the last days of Jesus Christ. Its chart-topping songs earned Andrew Lloyd Webber the Drama Desk Award for Most Promising Composer.

“Leading Ladies is consistently funny — indeed, increasingly hilarious as it progresses. While all the nods to Some Like It Hot, Twelfth Night and even Charley’s Aunt may smack of piggybacking, the play ultimately celebrates the shared spirit of mischief and fun that connects cross-dressing comedy from The Bard to Tootsie.” — The Houston Chronicle.

Winner of both the 1963 Tony Award for Best Play and the 1962–63 New York Drama Critics’ Circle Award for Best Play. Albee’s masterwork is a towering classic of American theater that was stunningly denied the Pulitzer Prize for Drama due to the committee’s objection to its mature themes. Join us for an evening of “fun and games” with George and Martha.

Music by John Du Prez, Eric Idle and Neil Innes, lyrics and book by Eric Idle. The 2005 winner of three Tony Awards, including the Tony Award for Best Musical. It’s a silly, irreverent and original interpretation of the film Monty Python and the Holy Grail.

“Thornton Wilder crossed with The Twilight Zone. When the northern lights appear in the sky and the characters shine with the joyfulness of love, it’s hard not to believe that the wintry air of northern Maine isn’t the cure for heartache,” said The New York Post. A valentine to would-be lovers.

Dramatized with flair and wit in a version first performed by the Royal Shakespeare Company, this adaptation of the ageless story captures Dickens’ ironic point of view while it creates a panoramic picture of Victorian London. With period music.